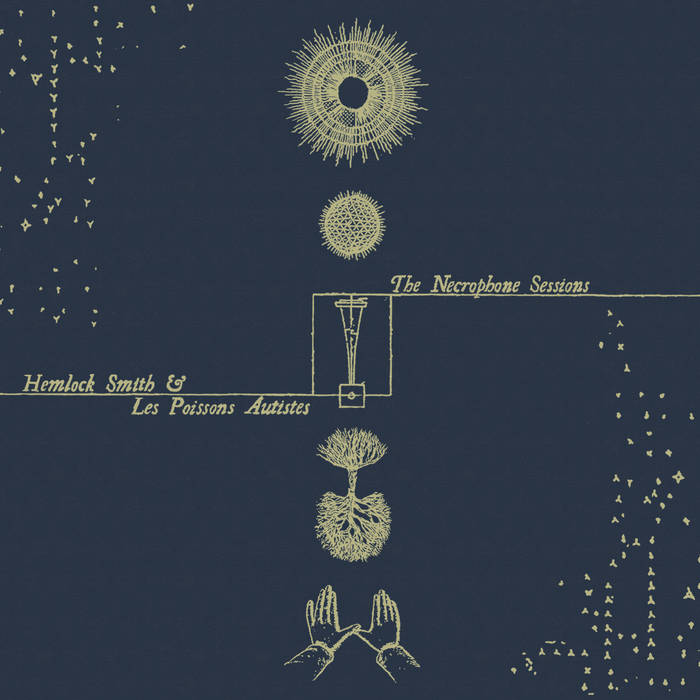 Roman Numeral Records are thrilled to announce the release of The Necrophone Sessions, the third collaborative release from Switzerland’s Hemlock Smith and les Poissons Autistes. While the former is mainly known for his dark folk tendencies as the latter duo are for their experimental approach to ambient, drone, and noise, together the trio unites all of these tonal aesthetics to what can only be characterised as a vivacious and exhilarating, boundary-shattering blend of dark and haunting music for the educated mind. While the frames of neofolk apply to The Necrophone Sessions throughout, you’ll find a plethora of vastly different but seamlessly amalgamating orientations from within its confines, together creating a narrative epic striding beyond its peers.

The intimate folk music of Hemlock Smith got thrown against the massive layers of noise developed by les Poissons Autistes for the first time in 2008, despite the fact that the musicians had only met few times prior. Done entirely via file exchanging, Three Times Dead was written in an almost dream-like state – the absence of external and internal pressure authorized every conceivable level of experimentation. Regularly cited among that year’s best Swiss music, the release was followed by long period of silence, only interrupted by their collaboration with Arnaud Ivan Sponar (Goodbye Ivan) for The Worst, a project which then produced the album Transatlantic Death Songs in 2015. In 2018, as a semi-joke, Hemlock Smith & les Poissons Autistes evoked the possibility of a spontaneous anniversary track to celebrate the ten year anniversary of Three Times Dead. As it happens, what was supposed to be a one-off track then morphed into a set of seven new songs, within mere months. In terms of style, writing and instrumentation, The Necrophone Sessions is the direct heir to their debut album on many levels, but equally evolves and expands even further, exploring territories very rarely brought to life. You’ll find layers upon layers of profoundly eerie timbres and tonalities intertwining with shiver-inducing storytelling, that manages to be genuine yet somehow distant but tangible, all at the same time.

Apart from that, The Necrophone Sessions is a contemporary record, conjuring up images of confinement, political and social crises and the notion of the end of the world as we know it, with its sonical claustrophobia mirroring our times and the present day. Relating to its title, the album also gives a real voice to the dead; In his prime, Thomas Edison tried to master the construction of a device called “Necrophone”, that should have allowed him to chat with the other side of the Styx. And while the apparatus, of course, never worked, the initial quantum idea and the related possibility of a conversation with memories and shadows inspired the creation of this record, as well as the cover, designed by Mathieu Donner. Mixed by Samuel Vaney, a big figure in Swiss metal and electronica (Cortez, Muhd, Fargue, Consor), The Necrophone Sessions is a twilight state album; as dark and gloomy as 2020 was, but modern and timeless to equal measures. As an aural concept, the album is like dwelling in an endless fever dream while pursuing one of the final specks of light known to mankind; Hope.